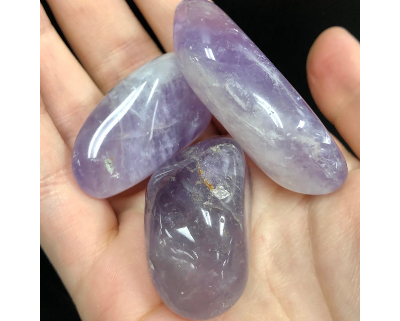 The perfect all-around healing stone, amethysts are useful for promoting peace, healing, and relaxation. Even the most heavily faceted refined amethyst can’t claim to have as many faces as it has uses!

Because of its beauty, amethysts have long been used for a variety of decorative applications, including:

While some of these uses were purely decorative, many had superstitious or religious meaning.

In Greece and Rome, amethyst was heavily associated with the god of partying, wine, and ecstasy; the Greeks referred to this god as Dionysus, while Romans called him Bacchus.

Because of the link with the de facto party god, both ancient Greek and Roman artisans would frequently stud their chalices, goblets, and cups with the gemstone. In doing this, they believed that they could prevent themselves from becoming drunk. Even the name of the gemstone reflects this belief. The word “amethyst” is derived from the Koine Greek word for “unintoxicated”, amethystos.

Of course, it’s now known that amethyst won’t do anything to prevent you from getting drunk. However, we’re certain that its inclusion added some bling to many ancient parties.

Ancient Egyptians seemed to have a similar idea upon discovering the gorgeous purple stone. In this context, amethyst was seen in two ways. On a material level, the stone was a symbol of wealth and power. Symbolically, they were utilized in rituals for increasing virility and ensuring love.

As an aphrodisiac, amethyst was used for both the living and the dead. On the mortal plane, people of status wore amethyst rings, necklaces, and headpieces. For the dead, the gemstone was carved into prayer beads. The deeper purple the gemstone, the more potent its power was believed to be.

Another ancient association for amethyst is its literal biblical status. As per the book of Exodus, the purple gemstone was one of twelve to adorn the breastplates of high-ranking priests. Because of this, amethyst is frequently seen in Christian art. In this setting, the stone holds no real functional significance; rather, Christian use of amethyst is meant as an outward symbol of one’s devotion to Christ.

The Origins of Amethyst

While the popularity of amethyst can be attributed purely to its good looks, there may be a bit more to the story than that. Like all other gemstones, this beautiful relic of the earth is forged from the fires of the earth’s ancient past.

More precisely, amethyst is derived from a mixture of water, iron, and a bit of gamma radiation. This isn’t to say that the stones, themselves, are radioactive, though! By the time the gemstone is mined, it’s free of this energy. Nonetheless, that power has cemented the color of the stone. While there’s a bit of nitty-gritty science behind all of this, the basic gist of the idea is that the radioactivity reacts with the iron in the deposits that form the stone. The more iron there is in the deposit, the richer the color will be.

So, why are we telling you all of this?

The answer is simple: this week, Goddess Elite is having a sale on all of our amethyst products! From gorgeous raw stones to towers and everything in between, it’s all 20% off. This sale only lasts until the end of the week, though, so be sure to take advantage of it before it ends.